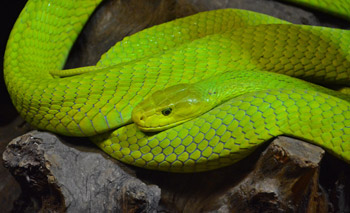 There are over 3000 species of snake, most of which are harmless to humans. A minority are venomous and around 250 of these are considered dangerous.

Most snakebites happen in tropical and sub tropical parts of Africa, the Americas, Asia, the Middle East and Oceania. People in poor agricultural areas are most affected with children, adolescents and young adults at particular risk.

Wide distribution, but absent from Australasia, Madagascar and some Pacific islands. Includes European vipers and rattlesnakes in the Americas. In Asia, Russell’s viper and the saw-scaled viper are among the most dangerous.

Mainly found in tropical and sub-tropical areas and includes many of the most dangerous species in the world e.g. cobras, kraits, mambas, coral snakes, sea snakes and all Australian venomous snakes.

Other venomous snakes that do not belong to these two groups are usually less dangerous.

Early symptoms can include pain, throbbing and swelling spreading from the bite, although  some highly venomous snakes have a relatively painless bite.

Later symptoms depend on snake species and can include:

Several species of cobra in Africa and South East Asia can spray venom over a distance of several metres. (Spitting cobras also deliver a highly venomous bite). The venom is often aimed at the eyes, resulting in severe pain, tissue damage and blindness.

Snakebite is a medical emergency that requires professional intervention as quickly as possible. Tell the doctor:

As antivenom is not used in every case of snake bite.

Snakes are usually shy and unaggressive unless physically threatened. If a snake is encountered back away slowly and cautiously.

There is no simple rule for distinguishing a venomous snake from a non-venomous one. All snakes can bite and may inflict painful wounds even if non-venomous

If travelling in an area where there are venomous snakes, make a note of where the nearest treatment centre is.

Farm buildings often attract snakes because of the presence of rodents. Snakes may enter houses to escape flooding during heavy rain and particular care should be taken at such times. If camping where there are snakes: